Are My Cats Fighting – That is the Question

Do you ever wonder if you’re watching a full on cat fight?  If you have two or more cats, you may have seen this happen.  One minute they are just lounging around; 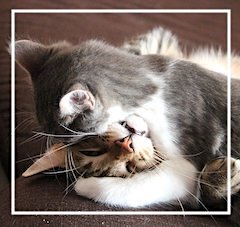 the next minute, they are on the floor biting and kicking.  How can you tell if this is just for fun or if they are seriously fighting?

Cats love to engage in play fighting (just like dogs), and often this behavior looks and sounds serious, even when it isn’t. That being said, occasionally, what starts as play can deteriorate into a fight. So, how do you tell if it’s a spat or a game? It’s really all about body language.

If your cats are rolling around on the floor swatting, look closer. Are they actually biting into the skin? Are their claws out? Are their ears back? Is their fur puffed up? Do they avoid each other after it’s over? These are all signs that they are disagreeing, and it’s not a game. If they take turns winning and seem friendly after it’s over, they are just amusing themselves with a play tussle.

If you determine that your cats are NOT playing, here are some tips to breaking up a fight: 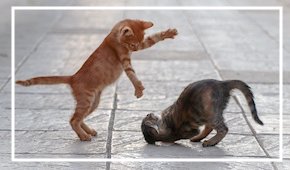 Once you get them separated, let them both cool off away from each other. Put them in separate rooms with the door closed or a baby gate between them. You may have to reintroduce them slowly. 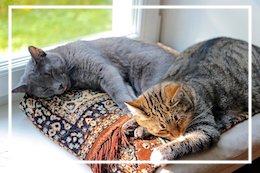 Some ideas to prevent fights: make sure they don’t have to compete for resources; each cat should have its own food and water dishes, toys, beds, and litter box (in different areas). If your cats have window perches, have two of them, perhaps in different rooms. Play with your cats, separately and together (if possible), because games and play can be very bonding. Also, having them spayed or neutered often reduces fighting.

Keep an eye on your felines, but in most cases, if you take the right steps, they will be good buddies again.